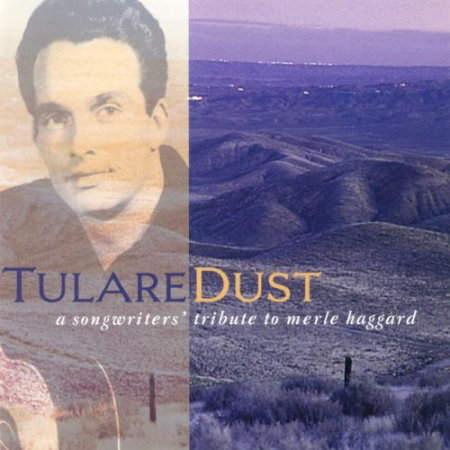 Merle Haggard has always been categorised as one of the great American Country Singers but, when it comes to songwriting, his talents are often overlooked. So, when a bunch of top Americana singers and songwriters came together, to produce a tribute to Haggard as a writer, it was to take a proper, in-depth listen to some of the songs that came from his pen.
For many, especially in the UK, knowledge of Haggard's songwriting doesn't extend much beyond 'Mama Tried' and 'Okie from Muskogee', so the first thing to point out is that neither of those songs feature in this outstanding compilation. Instead we have fifteen songs that mainly celebrate American small-town life and the lot of the working man. Haggard wrote from a rural working-class perspective and, along with Buck Owens, pretty much pioneered the Bakersfield Sound - a country music style that came about when dust bowl farmers, forced out of their native Oklahoma, Texas and Arkansas by the dust storms and droughts of the 1930s, sought agricultural work in the Bakersfield area of California. It's a grittier, more rock and roll/rockabilly based sound and Haggard would go on to be a big influence on the likes of Gram Parsons, Marty Stuart, Dwight Yoakam and many more country crossover artists.
These are songs about what it means to be on the lower rungs of a society, eking out a living for yourself and your family. We get songs about the loneliness of the long-distance freight driver ('White Line Fever'), race relations ('Irma Jackson'), escaping City life ('Big City') and the life of the displaced farmer/agricultural worker ('Tulare Dust/They're Tearing the Labour Camps Down'). The title track itself is a great example of Haggard's ability to write in simple, honest terms, about real life - "Tulare dust in a farm boy's nose/ wondering where the freight train goes/ Standin' in the field by the railway track/ cursing this strap on my cotton sack. I can see mom and dad with shoulders low/ both of 'em pickin' on a double row/ they do it for a livin' because they must/ that's life like it is in the Tulare dust".

The album was co-produced by Tom Russell and Dave Alvin and they both turn in strong performances, Russell on 'Tulare Dust/They're Tearing the Labour Camps Down' and Alvin on a beautifully melancholic 'Kern River' but there really isn't a weak performance anywhere on this album. There's a full tracklisting below but standout tracks for me are Joe Ely's stripped-down but muscular take on 'White Line Fever' and Lucinda Williams' wonderfully world-weary 'You Don't Have Very Far to Go'.

"Tulare Dust - A Songwriters' Tribute to Merle Haggard" is exactly what a good compilation album should be; quality songs delivered in each artist's own style but with obvious respect for the original material and it's significant that this is a tribute album from songwriters; artists who fully understand the value of a good song and how it relates to both its subject matter and to the audiences that hear it. Merle Haggard is held in high regard in Americana circles, and rightly so, and his songwriting deserves to be more widely recognised. His songs have been covered by artists as diverse as The Byrds and Dean Martin and this excellent album goes a long way towards showcasing just how good his compositions can be. If you missed this when it originally came out (1994) do yourself a favour and check it out now - and appreciate an American roots writer who deserves to stand alongside contemporaries like Willie Nelson and Kris Kristofferson. A great tribute to a true legend.